You’re probably familiar with regular word searches, where you’re presented with a grid of letters and a word to find. The word can be in a straight line horizontally, vertically, or diagonally (and perhaps backwards in any of those directions). For example, here is a grid of letters: 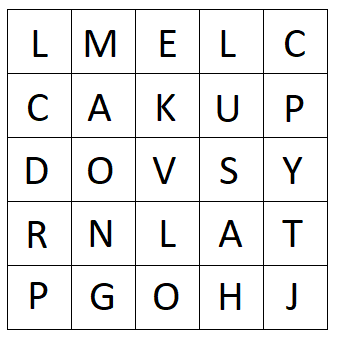 The word “JAVA” can be found going from the bottom right corner diagonally upwards.

In a kinky word search  the path that spells out the word can have one or more “kinks” – places where the path changes direction. For example, in the given grid you can spell the word “PYTHON” with $3$ kinks (one each at the T, H and O): 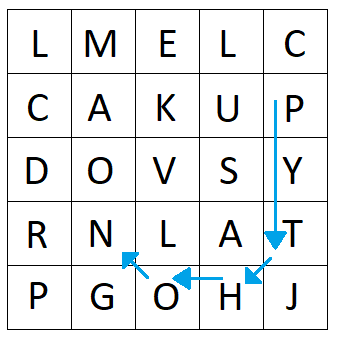 Figure 2: A kinky spelling of “PYTHON”

Adding kinks allows letters to be reused – the word “CPLUSPLUS” can be found in the upper right corner of the grid (with $5$ kinks). However you cannot stay on a letter twice in a row, so you cannot spell the word “HASKELL” in this grid (though you can find at least $11$ more common programming languages). Your task is to see if the spelling of a word with a certain number of kinks is possible or not.

Input begins with a line containing two positive integers $r$ and $c$ ($r, c \leq 10)$, the number of rows and columns in the grid. After this are $r$ rows of $c$ uppercase English characters. Letters are separated by a space. After the grid are two lines: The first line is an integer $0 \le k \le 10\, 000$, the number of kinks. The second line contains an uppercase word to look for, with maximum length $100$.

Output either the word Yes if it is possible to spell the given word with exactly $k$ kinks on the grid provided, or No if it is not.

Please log in to submit a solution to this problem